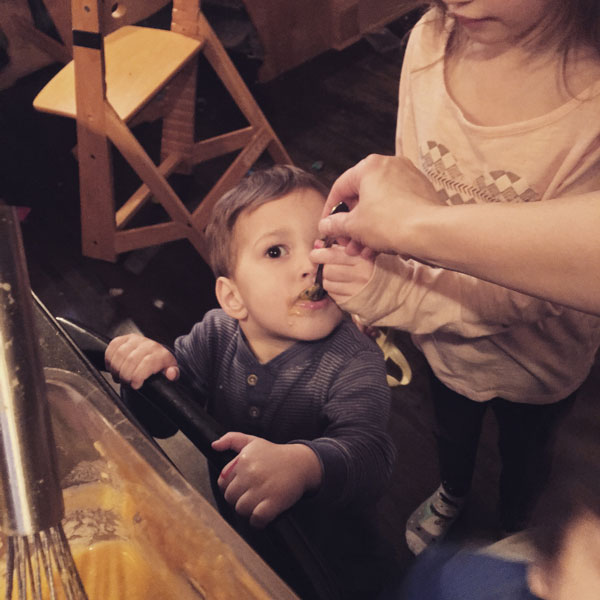 One of the side effects of owning a food business is bringing home loads of excess ingredients, like five pounds of delicious, organic parsnips from Driftless Organics, and extra spice mixes from Indian dinners. One cannot waste these things! I set about to turn it into a soup and thought it was really yummy. But what surprised me most of all, was my kids going ga-ga over it. Even my young sons — who pretty much only get excited about hot dogs — were begging for more. I call that a five-star recipe.

This mild vegan soup gets sweetness from the apple, and brings parsnips to life with ginger, garlic, and spice mixes from chicken tikka masala and gajar matar. Some tomato and coconut milk round out the flavor with creaminess and acidity. 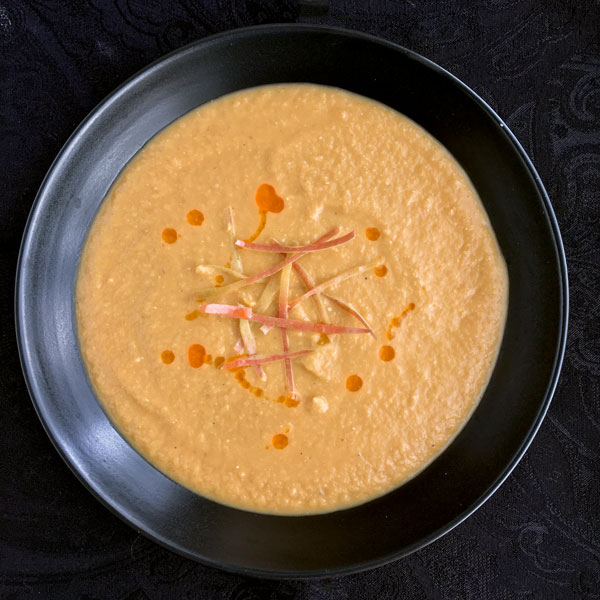 You can purchase the spices in the bulk section of most co-ops or organic grocery stores.
If you want a shortcut on the spices, substitute with 2 tablespoons of curry powder.

1. Prep ingredients. All the ingredients are going to be puréed, so they don’t need to be perfect.
> Onion > Cut onion in half and trim the top off; remove skin. Rough chop.
> Ginger > Use a peeler or a spoon to scrape the skin off the ginger. Rough chop.
> Garlic > Place the garlic on the cutting board and lay your knife on top of it, broadside. With the heel of your hand, smash down onto the side of the knife, then remove skin.
> Parsnips > Peel the parsnips. Trim off the top, and coarsely chop the thick parts of the parsnips.
> Apples > Wash the apple and peel (julienne peels if you want to use them for garnish). Quarter lengthwise and remove the core.

2. Soften the vegetables. Heat the olive oil in a large saucepan over medium high heat. When hot, add the onions and cook for several minutes. Then add the ginger and garlic, cook for another couple of minutes. Add the parsnips and apple , continue cooking until the onions begin to brown and caramelize.

3. Make the soup. Stir in the salt and Indian spices, cook until fragrant, about 2 minutes. Pour in the broth, scrape the bottom of the pan to set any brown bits free, and add the tomatoes. The liquid level needs to be about 80-90% covering the vegetables, add water as needed. Cover, bring to a boil, then reduce heat to medium high and simmer for about 20 minutes, until the parsnips are tender.

4. Purée the soup. Discard the bay leaf and add the coconut milk. Working in batches, transfer the soup to a blender. Do not fill more than half full, to reduce risk of splatter. Hold the lid down with a towel, to avoid burns, and purée until smooth. Transfer to a large mixing bowl and continue with remaining soup. Mix in more hot water if it is too thick.

5. Serve. Ladle the soup into bowls. Garnish with apple peels, if desired, sprinkle with chile oil or pepper flakes, and serve.

Editor’s Note: This post is not about getting rid of squirrels. If that is what you are looking for, you’re in the wrong place. Though if you find a good method, be sure to let me know.

We live in the lovely city of Minneapolis. I have lived in several other states, and have come to realize that Minnesotans live in the forest. Great emphasis is placed on keeping a diversity of tree species maintained on our boulevards and lots. Because of this, there is also an abundance of woodland creatures who have urban lifestyles. Sometimes I come home and it is like a scene from Bambi: rabbits all over the yard, squirrels scampering off, birds taking flight. Even foxes and the occasional deer. But it is the squirrels who are particularly frustrating, because their adaptation to city life is disturbing. Besides the fact that they eat our garbage and make it very difficult to compost, they also raid gardens and fruit trees.

We planted an apple tree several years back. The squirrels have always eaten the apple or two that the tree fruited. But this year was different and held much promise: there were at least three dozen apples! But as summer marched on, we noticed the numbers dwindling and half-eaten apples strewn on our yard. Last week there were ten left. Yes, it was early, but if we didn’t intervene there’d be none. So the kids and I picked the apples with plans to make apple pies with them.

Now for the State Fair part of the story. Like all good Minnesotans we spent a day at Minnesota’s Great Get Together. For the 10 days that the fair is open, all you hear about is the food. Typically, I just binge on salty and sweet foods like beer-battered deep-fried cheese curds and the real-milk milkshakes. But there are stands that sell actual food, and we wanted the kids to eat real food, so we tried some out.

While eating, what rang through my skull was the obvious challenge it must be to feed hundreds of thousands of people (quickly), and how premium ingredients are not important. Vendors produce wonderful-sounding creations, but when you take a bite there is no magic. Honestly, it’s like at weddings where they use elaborate phrases to describe green beans and an overcooked chicken breast.

So when I decided to make my apple hand-pies (which are very trendy now…though this is my first time making them), I piled on the premium ingredients: starting with the Honey-Crisp apples picked from the tree in our yard (organic, of course), Rochdale hand-rolled butter, vanilla bean and Ceylon cinnamon, with a touch of cardamom. I even used Meyer lemons for the juice. I thank goodness for The Wedge Co-op, where getting a real vanilla bean and Ceylon cinnamon from their bulk section is hardly an investment (maybe $3 for both?) and the hand-rolled butter costs the same as regular butter.

Make the crust. Mix the flour and salt in a bowl. Cut or shave the butter into tiny pieces. Place the butter in the flour and roll the bits with your fingertips until the butter is all broken up and the mix is uniformly crumbled. Add the water and vodka and, again, mix with your fingertips until it is evenly distributed. At this point, you should be able to push the dough into a ball and it should stay packed. (If not add another tablespoon of ice-cold water, mix to distribute, and try again.) Cover tightly with plastic and pound into a disk. Let it rest for an hour on the countertop if making the pies right away, store in the refrigerator if you need it later. Let the dough come to room temperature before rolling it.

Cook the apple filling, then let cool. Place all the filling ingredients in a saucepan, including the reserved vanilla beans (but not including the egg, fyi). Cook over medium heat. Using a wooden spoon, mix with effort so that the vanilla bean and spices get distributed evenly. Cook until the apples are softened, about 15 minutes. Let cool completely before using.

Preheat oven to 400° F and roll out the dough. Roll out the dough to about 1/8-inch thickness. Cut the dough out into 4- or 5-inch disks (the size of a teacup saucer). Put a spoonful of filling on one half each disk. Make sure there is at least a half-inch margin of dough on the outside. Then fold the remaining half over the top, so you have a semi-circle. Gently press the edges of the disk together and use your fingers or a fork to smoosh the edges together. Basically, you want to seal it tight. Brush the beaten egg on top and sprinkle with sugar.

Bake. Line two baking sheets with parchment paper. Space the pies evenly apart on the baking sheets and set in the upper and lower third of the oven. Bake for 35 minutes, or until the tops are golden brown and the filling is bubbling. Place the pies on cooling racks and let rest for at least 15 minutes.